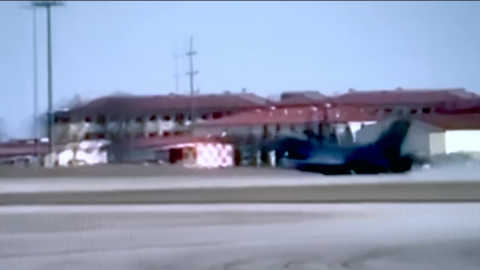 According to the report published by the USAFE, the F-16CG Fighting Falcon was forced to do a gear-up landing. The emergency landing occurred because of a blown tire which resulted in the separation of wheels during takeoff.

Further investigation confirmed that the cause of the incident was the failure of the wheel bearing in the landing gear. If separated, the only way to safely recover the aircraft was to land without the landing gear.

The estimated damages amounted to approximately $6.1 million and there were no reported fatalities, injuries, or damage to civilian property stemming from the whole incident.

Luckily, the pilot inside the F-16 knew what he was doing or that would have gone way worse.