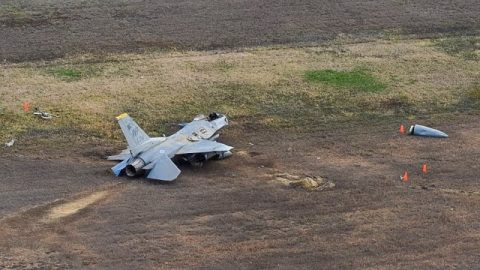 On December 2, 2019, an F-16 crashed between runway 36 and taxiway P of Kunsan Air Base, South Korea. The F-16 was returning to Kunsan Air Base after completing a local continuation training sortie.

During the initial contact with the runway, the F-16’s right main landing gear collapsed. As the aircraft yawed to the right, the pilot attempted to keep the plane on the runway and go airborne again to no avail. Fortunately, the pilot successfully ejected and only suffered minor injuries.

According to investigations, the incident was caused by the failure of the gear’s downlock actuator, causing the gear to collapse, and making the plane uncontrollable. This issue has been well-documented to happen to F-16C/D blocks and has been addressed in other variants.