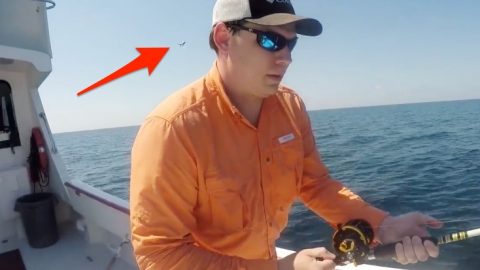 Every once in a while it’s nice to get out on the open ocean and enjoy a day of fishing. It is such a relaxing and calm way to spend a day with your friends. The bright sunny skies, the calm blue ocean and the loud roar of a fighter jet’s roar.

That’s right, every so often US Navy fighters will have training missions over the open ocean to make sure their skills are in top form. Those F-18s need plenty of room to move in order to pull off those maneuvers and every so often there might be a fishing boat on the flight path.

“All F/A-18s can be configured quickly to perform either fighter or attack roles or both, through selected use of external equipment to accomplish specific missions. This ‘force multiplier’ capability gives the operational commander more flexibility in employing tactical aircraft in a rapidly changing battle scenario.”

This fisherman was just hanging out with his friends trying to reel in his latest catch. He didn’t have the slightest idea that a fighter was about to sneak up on him with a powerful sonic boom. But honestly, that’s what makes this video so entertaining to watch over and over again. And just when you think the jet is done it comes back for another pass.

Watch the jet buzz us twice.