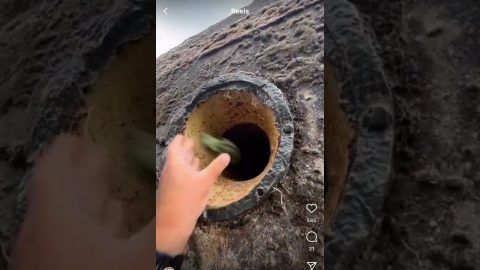 Humans have always been adept at trolling each other. Just take a look at this fake air vent found built into a bunker in Normandy.

The unfortunate but opportunistic soldier who threw that grenade must have had a very tough time trying to decipher what went wrong as the grenade exploded.

It all looked so simple and inconspicuous. A bunker with a hole to help the crew inside breathe? That seems logical enough, right?

To be fair, it’s not entirely fake – this air vent has an anti-grenade design. The “loop” that you see actually has a horizontal tube in the middle of it that goes into the building.

The grenades can’t maneuver their way inside the horizontal tube and instead would come rolling down to the other end of the vertical tube.