Guy Shoots A 50cal Straight Up And It Comes Back Down, Fast 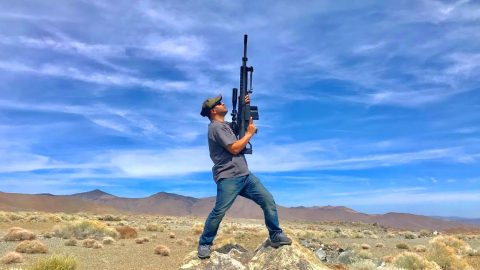 Just Wait For That Sound Of Impact.

Let’s start off with the obvious. We feel like in this day and age some people see something online or on T.V. and think it’s ok to do. Kind of like the “monkey see monkey do” mentality. So, as you will be told in the video, “DO NOT TRY THIS AT HOME.”

He does this a few times, but the best quality audio of the bullet coming down is at 7:18.

When you attempt something of this scope, it’s important to know what you’re doing. Just a tiny deviation in angle when you’re shooting a bullet straight up in the air can make it land hundreds of feet from where you think it’ll land, thus, putting yourself at risk of shooting yourself on YouTube.

Now, we’ve used a couple of videos from this YouTube channel and the guy does some risky stuff, but it always seems well thought out and safe (ish). In this episode, he takes a rifle and shoots it straight up, promptly taking cover.

In the end, we found out two things. A bullet coming down sounds like a UH-1 Huey coming in from the distance. Also, it comes down between 200-300 miles per hour and takes it a bit over a minute to hit the ground.