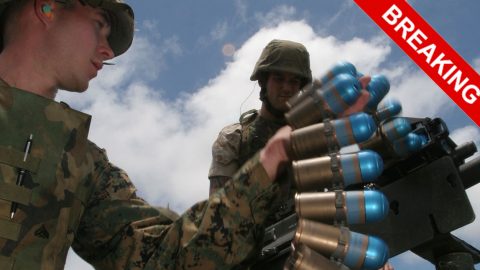 Yes. This Is A True Story.

If you’re a resident of North Dakota and reading this, you might be able to make a quick buck. If you’re not, you can at least get a good laugh as the Air Force just made quite a blunder.

On May 1tst, 2018, the 91st Missile Wing Security Forces of the USAF were traveling along a rural road in North Dakota when the back gate of their Humvee opened and a box fell out. This was not discovered until over a week later because according to reports, 100 airmen were seen traversing that stretch of road looking for something on May 11th.

Inside the “green, metal box” was a belt of ammunition for an MK 19 grenade launcher (pictured above). A spokesperson for the Air Force did make it explicitly clear the grenades cannot be fired without the launcher, but these rounds are full of explosives nonetheless, so they can be dangerous.

If you happen to find this box or know of anyone who might know something about it, get in contact with the Minot Air Force Base. The reward for such information is $5,000.