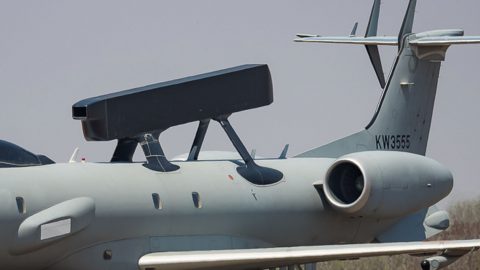 Military aircraft around the world are not necessarily built for a single purpose. Unlike the A-10 Thunderbolt II which was built solely for CAS (close air support), many platforms are actually adapted from civilian versions of aircraft.

One such example is the DRDO AEW&CS.

The basic version of this aircraft is the Embraer ERJ which is a Brazillian design. It’s one in a series of passenger jets which was first introduced in 1992. Able to fit up to 50 passengers, it’s a widely used aircraft in Latin American countries.

Because of its size and versatility, many militaries around the world use this aircraft for national defense. One version of it is India’s DRDO AEW&CS, the acronym standing for India’s Defence Research and Development Organisation Airborne Early Warning and Control System.

As its name suggests, this aircraft ensures national security by detecting other countries’ equipment in the area by using various radar technologies. DRADO’s version is outfitted with two planar arrays which are mounted on the top of the fuselage. This allows the aircraft to detect fighter sized targets to up to 200 miles away.

You can watch a short flight demo of this aircraft below.