How The B-47 Changed Our View Of Aviation Forever 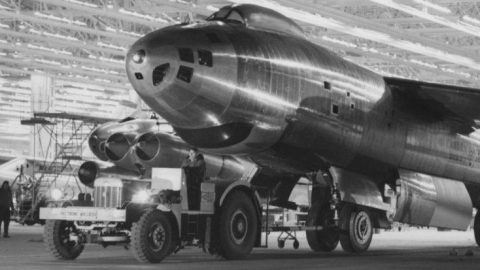 After the fall of Nazi Germany, the United States suddenly found itself pitted against the Soviet Union in a new arms race. The key to victory was the development of nuclear weapons, but more importantly, they needed effective ways to deliver them. This gave way to the development of a new kind of subsonic bomber, the Boeing B-47 Stratojet.

Initially, the B-47 was developed as a reconnaissance jet using swept-wings inspired by German aircraft of WWII. The Air Force created it with the intent to improve their previous bombers using jet engine technology. The B-47’s jet engines paired with the swept-wings made it a very innovated plane for the time, allowing it reach speeds over 600 mph.

Even Chuck Yeager sang its praises for great handling when he tested the XB-47 as an experimental aircraft. Like many aircraft created during the Cold War the B-47 never actually saw combat against the Soviet Union. However, it did play a vital role in creating a basis which modern airliners were derived from.

In the late 1950s as the B-52 Stratofortress was introduced there wasn’t much room left for the B-47. The B-47 remained in the reconnaissance role until the late 1960s but never had the chance to prove itself in combat.