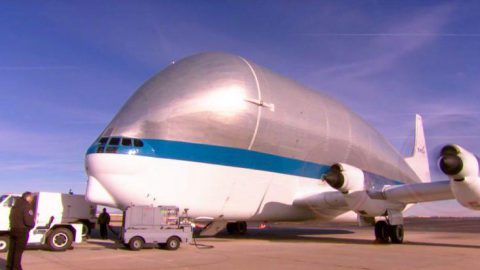 The United States Space Program has some massive shuttles and transporting them is no easy task. Most aircraft are not capable of moving such large cargo so a new plane was designed for that purpose, the Super Guppy.

The Super Guppy is a custom-made transport plane used exclusively by NASA. This immense plane has transported space shuttles dating back to the 1960s and played a crucial role in the Space Race. Built from the fuselage of a C-97 Stratofreighter, engineers removed the original roof and added a ballooned ceiling to provide a suitable room for oversized cargo.

“The Guppy is an amazing aircraft that’s been involved in nearly every part of the human space exploration in NASA’s history. From the Saturn rocket boosters in the 60s, it has moved parts Apollo, Hubble Telescope, the skylab. A lot of people don’t realize what it’s done in our national history.”

While there are planes that can carry more weight, the sheer volume of the plane is hard to match. In this video from the Smithsonian Channel, the Super Guppy gets a checkup before taking its first flight in eight months.