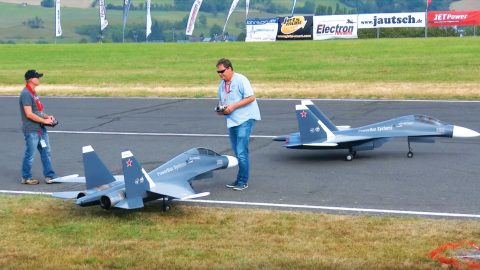 We’ve seen plenty of Rc planes over the years, and although we’re in love with the scale sounds of our favorite World War II warbirds, seeing this video left us pretty wide-eyed.

Recorded at the Jetpower Fair 2016 in Germany, these two guys brought with them some pretty large Sukhoi Su-30s. The models looked great, but it was the flying that got us. We’ve seriously never seen anything like it.

Here are some quick facts about these builds:

Sure, these models are great, but that formation flying was impeccable. From barrel rolls to low passes, the whole display was fantastic but the falling leaves stole the show. Check out 3:20 to see what we mean. That’s pretty impressive.

The only thing that could make this video better is not having the music in the background. We get that it’s Russian music because these are Russian planes, but as someone who grew up in Europe, let me tell you that it’s not good music even for Russian standards.

An opinion, but probably one shared by many.