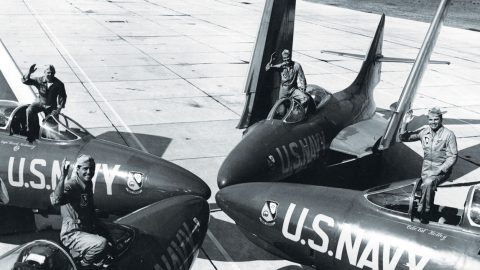 One thing became apparent when we dug up this video. The discipline and professionalism of the Blue Angels were as strong back then as it is now. The planes might be bigger. They might be faster. The pilots might have to withstand a few more Gs, but one thing didn’t change. The pilots that fly in these cockpits.

The video is about 7 minutes long, so feel free to skip around. The whole thing’s worth it however, so we recommend you sit back and enjoy the entire video.

This vintage clip was part of a show called You Asked For It which aired from 1950 to 1959. Hosted by Art Baker, the viewers of the show were asked to send in postcards of things they wanted to know about and the producers would make an episode about it. In this one, people wanted to know about the Blue Angels.

We’ll let the host and the aviators do all the talking, but we’ll just give you one bit of information not included in this clip.  The Blues flew Cougars from 1954 to 1957. Before that, it was the F9F-2 Panther and after the F11F-1 Tiger. Now, enjoy the show!