How To Use WWII’s First Assault Rifle Like A Pro 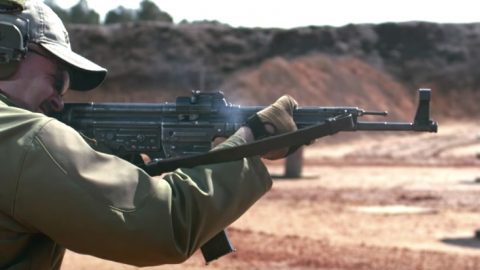 During WWII, the Third Reich’s assault on the Soviet Union created one of the bloodiest conflicts in human history. The Red Army narrowly defeated the invading Germans after countless losses thanks in part to one particular weapon, the StG 44. The StG 44 earned a reputation as the first assault rifle and then faded into obscurity, so what is its story?

Adolf Hitler opposed Germany’s use of machine weapons due to his own experiences in World War I. The StG 44 was designed behind his back knowing that he would never approve it. However, Hitler had a change of heart after seeing its performance he had a change of heart and Wehrmacht units were equipped with the StG 44.

The StG 44 remained a lethal weapon German troops during the finals years of WWII. It could have made a difference for an Axis victory if it had a wider circulation.

“Thank goodness hundreds of thousand weren’t pumped out earlier in the war. That would have cost a whole lot more American lives even if it wouldn’t have affected the outcome.”

Following the end of World War II, the StG 44 didn’t see much use. However, after examining its design, a Soviet Soldier named Mikhail Kalashnikov made some modifications, giving way to the AK-47. This video from Vickers Tactical gives a great lesson on how to operate the StG 44 the right way.