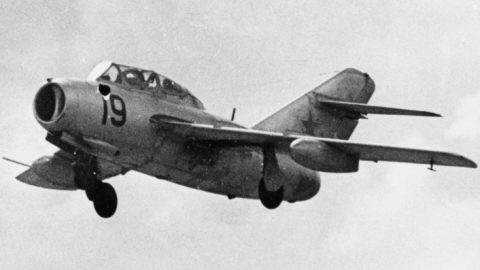 (Photo by Sovfoto/UIG via Getty Images)

Throughout the years there have been many stellar achievements in the field of battle that receive world recognition. However, there are also certain conflicts that remain hidden from the public despite triumph in the face of adversity. During the Korean War, one fighter pilot scored a larger than life victory but couldn’t talk about it for decades.

In 1952 as the Korean War was in full swing and the United States was gaining ground against North Korea. The Soviet Union decided to intervene with the American advances and sent their newest fighter to help, the MiG -15. However, these fighters were ordered to only fly over China not to enter North Korean airspace. This was in order to avoid potential capture and direct conflict with the United States seen as an act of war.

In the early 1950s, the MiG-15 completely outclassed all American fighters and the Soviets still held the element of surprise. Captain Royce Williams was flying his F9F-5 Panther as an escort when he encountered a group of MiG-15s. The Russian fighters broke into two groups, but Williams stayed on them.

Despite being in an inferior aircraft, Williams proved he was the superior pilot by taking down one by one. In total, he earned four kills over the MiG-15s before the damage his fighter sustained forced him to return to his aircraft carrier. He expected to become a decorated hero, but his superior officers made him swear to secrecy about his experience.

“The NSA told Admiral Briscoe to tell that young man that he got at least three. They were able to follow the MiGs from take-off until the remnant MiGs came back. Admiral Briscoe warned Williams to never speak of the incident for fear of escalating the Korean conflict into World War III.”

Fortunately, that conflict has been declassified and Royce Williams is earning the praise that his heroism deserves. Mark Felton Productions provides a more detailed account of his stellar aerial victory.