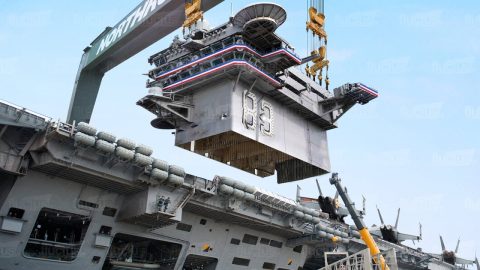 Since the 50s, most US aircraft carriers have been constructed at Newport News Shipbuilding facilities in Virginia. Added to the list is USS Gerald R. Ford, the largest carrier ever built.

In addition to being the largest carrier, the fairly new vessel is also the largest warship ever constructed in terms of displacement, around 100,000 long tons.

Carriers are assembled in separate modular pieces called “superlifts.” Each contains compartments spanning multiple decks and weighing between 80 to 900 tons.

Lifted By A Crane

The facility uses a bridge crane to carry the modules and place them in their proper positions. A ship like the USS Gerald R. Ford needed 162 superlifts to complete.

Construction began in 2005, but delays prolonged the process until it was delivered in 2016. By 2018, it still had issues with its nuclear propulsion system and munitions elevators, increasing the cost to $13 billion, making it the most expensive warship ever made.