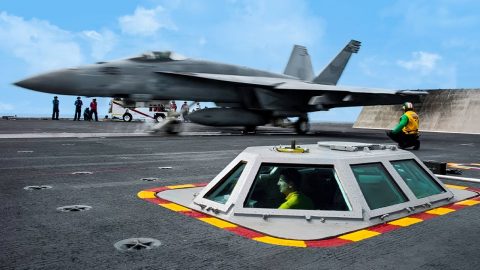 A carrier’s Integrated Catapult Control System is also called “the bubble.” These can be found on some carrier flight decks with the goal of enhancing safety and increasing efficiency.

Sailors need to squeeze into the tiny cramped space from below deck. They must bolt the hatch inside before the bubble can rise a couple of feet above the flight deck.

Though it may seem like the perfect job, deployments can actually sometimes last 18 hours long. Imagine doing that many hours while also being responsible for the lives of your fellow crew members!

Just before the launch, the ICCS performs safety checks. They also check the winds and ensure the path is clear for takeoff. If something is deemed unsafe, the launch is suspended by pushing a button.

According to Petty Officer Fredrick Patton, he sometimes munches on snacks while reading a book during downtimes between flight schedules.