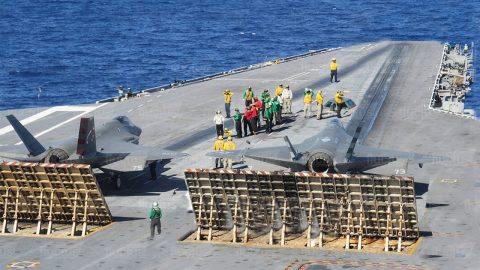 Several F-35Cs can be seen taking off from a Nimitz-class carrier, which looks as awesome as it sounds.

Before take-off, the F-35Cs on the video are seen taxiing on the runway with their wings folded. This is because the C variant has eight more feet of wingspan. To conserve as much space as possible aboard carriers, their wings are folded when in storage.

One by one, the F-35s lined up for takeoff. When the first one gets into position, the blast shield is raised a few feet behind the aircraft to shield others from its exhaust. Then, the nose gear is affixed to the CATOBAR system as the pilot waits for the signal.

Watch them take off at around the 5-minute mark of the video below!