A Day in Life of US Weirdest $4.5 Billion Stealth Ship Patrolling the Sea 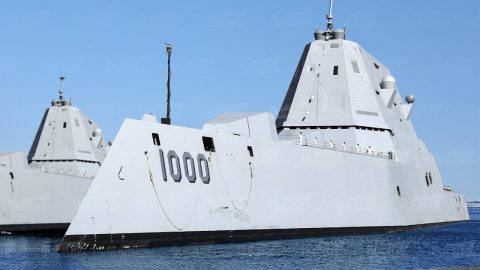 The USS Zumwalt is one of America’s latest destroyers. One of its key features is its unique angular hull. The design reduces its radar cross-section, making it appear similar to a fishing boat despite measuring 600ft in length.

With that said, the destroyer only has limited deck space – a helicopter deck on its rear.

Inside, the bathroom situation is identical to other Navy ships – a small room with a toilet and shower. The ship also has a complete gym and a mini barbershop to boot.

On the other hand, crew members share a cabin with their own lockers, a dedicated ironing board, and a small table space.

In total, there are 142 members on board – a far cry from the usual 400-plus sailors that ships with the same size carry. This is primarily due to the Zumwalt’s reliance on automation, reducing its need for more hands on deck. Nevertheless, its crew members are still trained daily to maintain these advanced systems.