Inside Billions $ Airbus A380 Production Line – Building and Assembly Process 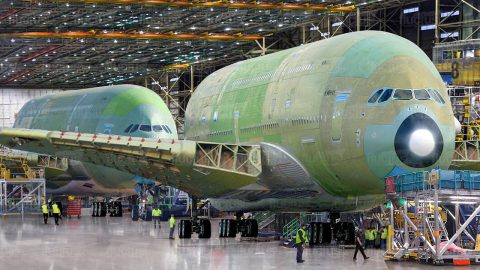 In 2007, Airbus unveiled what would become the largest passenger airliner in history – the A380. The company’s $10.7 billion program was launched in 2000 in hopes of taking over the Boeing 747.

Like other Airbus aircraft, the A380 is manufactured in sections weighing thousands of pounds all over Europe. The components are transported via flatbed trucks and are sometimes even escorted by police due to the size of their sections.

Aside from trucks, Airbus also uses its Beluga XL aircraft to transport heavier sections efficiently. These sections are then assembled at Airbus’ 1,700-acre factory in Toulouse, France.

After the airframe and its Trent 970 engines are installed, the aircraft is wheeled out for its first very test flight. When finished, the A380 will undergo the painting process before it is ready for delivery.