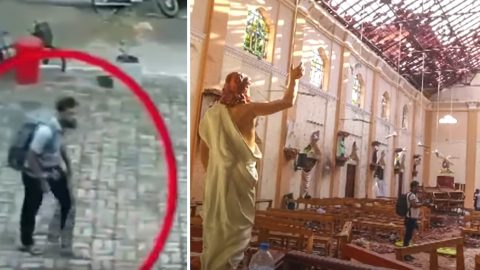 Images from the devastation of the Easter Sunday bombings show glimpses of how the country is mourning. via @nytimes #lka #SriLanka #EasterSundayAttacksLK #EasterAttacksSL pic.twitter.com/RkxCbYAjCR

At least six suicide bombers attacked three luxury hotels and three churches all across the country, killing at least 320 people and injuring 500 more.

ISIS has claimed responsibility for the attacks and while this is not yet confirmed, it’s a sobering reminder that the organization is still alive and well.

However, Sri Lankan officials have pinned the blame on a group known as the National Thowheed Jamath (NTJ), a group splintered off from another hardline Islamist extremist group.

While authorities have arrested 40 suspects in connection to the attacks, the threat may not be over. Prime Minister Ranil Wickremesinghe has stated there are “still people on the run with explosives.”

Some intelligence officers were aware of this incidence. Therefore there was a delay in action. What my father heard was also from an intelligence officer. Serious action need to be taken as to why this warning was ignored. I was in Badulla last night pic.twitter.com/ssJyItJF1x

Sadly, it appears that multiple warnings for the bombings were issued but not heeded. Some of the warnings reportedly came from foreign intelligence.

“This was not an oversight, it was absolutely an irresponsible act which should be dealt with under the criminal law of the country. This is a crime which has been done by omission.” -unnamed former police officer