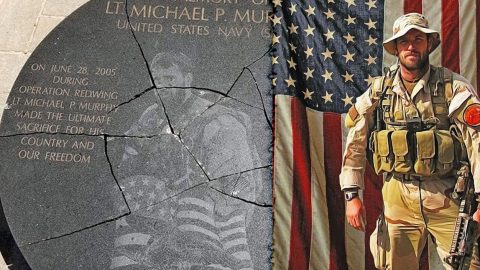 On July 19th, 2018, a memorial dedicated to a fearless Navy SEAL who sacrificed his own life to save those of his fellow soldiers was broken into pieces. The commander of the police department of Ronkonkoma, New York, immediately released the following statement, “There’s no words to express the outrage that veterans feel about desecrating a veteran’s monument.”

The monument was built in honor of the man born in the town of Ronkonkoma who went on to become a Navy SEAL. His heroism and sacrifice were encapsulated in the book Lone Survivor: The Eyewitness Account of Operation Redwing and the Lost Heroes of SEAL Team 10 written by Marcus Luttrell, the only survivor of the operation during which Murphy perished.

Murphy’s team was surrounded by insurgents in Afghanistan and as a last resort, he climbed a cliff to make a call for support, exposing himself to enemy fire and subsequently getting shot. This operation was also the subject of a movie starring Mark Walberg called Lone Survivor.

Here’s what Luttrell had to say about the incident in a Tweet:

Only a coward would do this. We are matching Crime Stoppers Reward to anyone who turns in the low life who did this. To donate towards repairs go to MurphFoundation.org.

The culprit is a 14-year-old-boy who was arrested by the police after his parents turned him in. His name has not been released due to his age but the local police department said he’ll be charged with vandalism and second-degree criminal mischief.

Local resident Evely Vollgraff was quoted saying, “I really could not believe that somebody would do something that disrespectful to a fallen hero.”

The monument was taken down early Friday morning, with plans to build a new one. Marcus Lattrell, as mentioned in the Tweet above, started a page for donations so the memorial could be rebuilt quickly and this time, from thicker, “indestructible” marble.

The town supervisor also said they’ll be adding additional security to the park so similar incidents don’t happen in the future.

You can find the local T.V. coverage of the incident below.