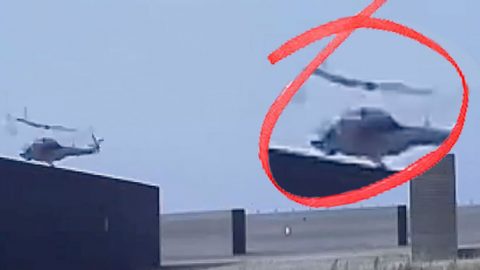 On Tuesday, July 17th, 2018, a helicopter occupied by 6 U.S. Marines crashed seconds after takeoff claiming 5 lives and leaving another serviceman in the hospital.

The incident occurred at a Marine base in South Korea in the city of Pohang. At approximately 5 P.M. local time, the helicopter took off for a test flight right after undergoing major repairs. It climbed to about 30 feet when without warning the main rotor completely detached from the helicopter, sending it straight down. After a week, CCTV footage from a nearby hangar was released clearly showing the entire rotor detaching from the airframe which helped with the subsequent investigation.

The fuselage immediately caught fire upon impact killing five Marines and severely injuring one. It has been reported that one of the firemen involved in putting out the fire was also hurt.

The helicopter involved in the crash was a KAI KUH-1 Surion, a utility helicopter developed by Korea Aerospace Industries. It is a relatively new airframe, first introduced in 2013.

Since its initial production, the helicopter has been plagued by a few problems including icing issues. In 2016, CHC Helikopter Service Flight 241 in Norway went down claiming 13 lives. Witnesses told reporters they didn’t see anything wrong with the helicopter prior to its main rotor suddenly detaching and the rest of it going down, exploding on impact.

This particular crash was attributed to icing issues and fatigue fractures on certain parts, putting in question the airframe’s airworthiness certificate. Although it was grounded at the time, regular operations soon resumed and these helicopters were back in the air.

The latest crash is currently under investigation by a specially formed military committee but immediate reports dictate it was a mechanical failure that caused the crash.

Footage that was sent to me of the Helicopter Crash that occurred at a South Korean Marine Base. Lost for words, I initially thought it was a wire strike – but it appears something perhaps came loose in the rotorhead5 Killed, 1 Injured