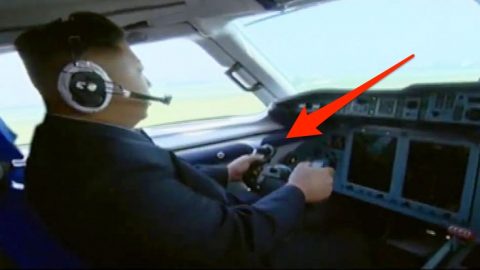 North Korean Dictator Kim Jong Un is a man of many wonderful talents. He is immortal, he can talk to dolphins, his wonder drug cured the Ebola virus and he can make sure that James Franco films stay out of movie theaters. Despite those incredible accomplishments, Kim Jong Un has proudly displayed his newest talent, flying a plane.

Showing off North Korea’s nuclear capabilities wasn’t enough to keep him busy so it looks like he’s taken up flight as a new hobby. He looks quite confident behind the wheel of his Antonov An-148 surveying the land of his starving people. The citizens of North Korea can turn their gaze to the skies and stare at their leader as he was the god that he tells them he is in every propaganda video.

I’m quite impressed with his performance, which is in no way the hard work of the copilot sitting next to him. Honestly, I’m not even sure why he needs a plane, we all know that he is capable of flight just like Superman. As you can see their fearless leader is perfect in every way and the narrator is even more enthusiastic about his piloting skills. This direct flight film to World War III is one you can’t miss.