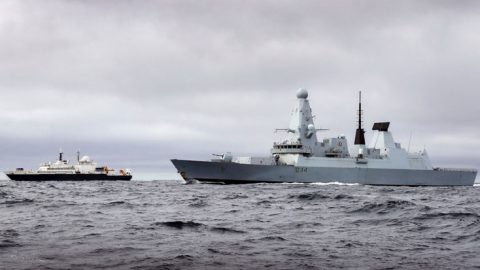 The United Kingdom and Russia have not always been on the friendliest of terms and things are exactly getting better. Now things have begun to heat up between the two as the Royal Navy dispatched a helicopter to intercept a Russian vessel moving through the English channel.

The HMS Diamond and a helicopter moved towards the Russian vessel traveling through the English Channel. The Royal Navy claiming the ship to be a spy vessel and monitored it as it moved towards international waters.

“HMS Diamond met up with Yantar and will continue to monitor the vessel’s movements and activities as it continues north.”

However, Russia claims that the Royal Navy overreacted in this situation and that the Yantar is merely a research vessel. This vessel commissioned in 2015 is equipped with submarines for deep sea exploration. The Yantar was returning from a year-long survey of the world’s oceans and even participated in the search for the missing Argentinian submarine that disappeared last November.

Where do you stand on this issue? Was the Royal Navy in the right to intercept the Yantar on its route back home? Or was this simply an excessive show of force on the part of the Royal Navy?