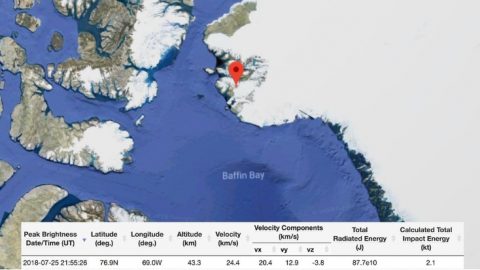 The United States Military has well over 800 bases around the world in order to maintain peace and order. Operations at these global bases are fairly routine and nothing out of the ordinary occurs. However, there was a bit of activity at a US Air Force base as a massive explosion occurred, yet the US Air Force isn’t talking.

The 2.1 kiloton explosion occurred near Thule Air Base in Greenland and immediately questions arose. Some suspected a bombing, terrorists activity or sabotage from within the base. Then some experts did some searching and discovered that the source of the explosion was something even more bizarre, a meteor.

We’re still here, so they correctly concluded it was not a Russian first strike. There are nearly 2,000 nukes on alert, ready to launch. pic.twitter.com/q01oJfRUp4

This dispells concerns of a strike from an enemy nation or possible terrorism, but it still causes for concern. So far there have been no reports of damage or deaths, yet the US Air Force has remained silent on the very noticeable explosion.

“Had it entered at a more perpendicular angle, it would have struck the earth with significantly greater force.”

This was about the best possible outcome for this situation, considering that this could have destroyed the entire planet.