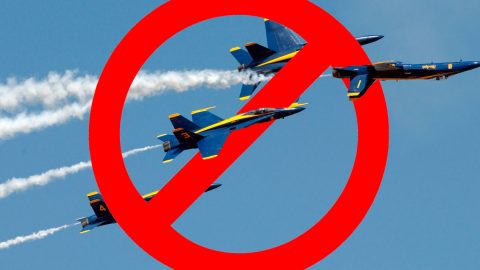 We’re going to try and tactfully shut down this Seattle Time’s writer as he is a Vietnam veteran and we respects that, but as such, we’d think he would be a little bit more pro military or at least understand the importance of the Blue Angels. Although we’re all entitled to our own opinions and should be able to voice our concerns, the article we read did not in any way make sense in terms of logic.

Let us explain by commenting on some of the highlights of his article.

Patrick Pilcher starts of his article writing, “Seafair has always brought a festive mood to the Puget Sound region. No one can deny the excitement of the Navy’s Blue Angels roaring overhead. Yet I find their annual visit in poor taste.” That’s one way to lead off your opinion.

Now, here are his so-called reasons of why he thinks so:

We get the points he’s making here (somewhat), but he underestimates the extreme value of these airshows. Families who take their kids at young ages show them the might of our military and in turn engrain in their young minds a sense of pride, national pride.

This in turn forms lines at the recruitment offices down the road, those same kids now ready to serve. So, in essence, whatever money is spent per year on the Blues cuts on the costs down the line if the military’s lines end up dry and they have to spend millions of dollars on traditional advertising.

Here are some of the responses on social media that were put under the article when it was published online:


There are hundreds of similar comments and it seems clear many of us are on the same page. And rightfully so if we may say so ourselves.

If you’d like to indulge in the entire article, you can read it here.

Also, here’s a short clip that’ll remind us all of how awesome those airshows really are.