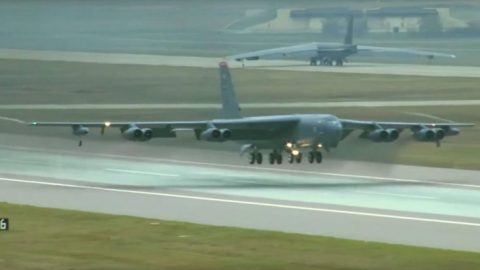 The B-52 Stratofortress is among the iconic bombers in the United States Air Force. For over 60 years this jet has answered the call to arms when a nuclear threat occurs. The B-52s at Minot Air Force Base are part of the Continuous Bomber Presence (CBP) and to fight fire with more fire.

These B-52s are routinely dispatched to Air Force Bases around the world in event of threats from terrorism and other hostile nations. The Continous Bomber Presence served as a deterrent for North Korea’s nuclear testing as tensions rise in East Asia.

“The mission itself is a deterrence of potential adversaries.”

At Minot Air Force Base in North Dakota, a huge group of B-52Hs prepares for a new series of deterrent missions. Powerful and brooding, one after another they fly into the sky equipped with up to 26 nuclear-tipped cruise missiles. I don’t think I’ve ever seen so many B-52s all at once, it’s an amazing sight to behold as they soar into action.