Sound Of An F4U Corsair Firing Up 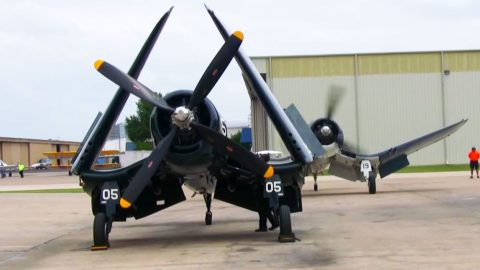 The Vought F4U Corsair is arguably the best fighter plane of the second World War. Its speed, agility, handling and weaponry made it a fearsome enemy for Japanese fighters which stood little chance against it.

The United States Navy went through a few fighters during WWII before finally finding the Corsair which would change everything. Superior flying especially when it came to attitude quickly turned the tides against Imperial Japanese Navy’s A6M Zero which rules the skies over the Pacific early in the war.

“I learned quickly that altitude was paramount. Whoever had altitude dictated the terms of the battle, and there was nothing a Zero pilot could do to change that — we had him. The F4U could outperform a Zero in every aspect except slow speed maneuverability and slow speed rate of climb. Therefore you avoided getting slow when combating a Zero.”

The Corsair in this video is a combat veteran of WWII and is owned by the Palm Springs Air Museum in California.  Watch as it completes an absolutely perfect flight and stuns an adoring crowd.

This coming Saturday December 9th "Open Cockpit" in our own beautiful F4U Corsair. From 10:30-12:30 actually sit in the cockpit yourself see what it is like in the pilot's seat of one of the most favorite aircraft of World War II and into the Korean War! It was known as the most capable carrier-based fighter-bomber of the War. Imagine taking to the air off a carrier deck in the Pacific and take that selfie! This was a past flight demo of another Corsair right here. "Open Cockpit" is free with your admission.While you are on your carrier deck adventure, the kids can be playing in the snow and visiting Santa! Both Saturday and Sunday, Dec 9 & 10, Santa will be flying at 11AM to the Museum in his own aircraft to join the kids playing in snow direct from the North Pole. The best Santa Claus event in the entire Coachella Valley for sure! Children 12 and under free with an adult admission.Always much to do here at the Palm Springs Air Museum! Thanks!