Navy Fighter Is Advancing Flight In A Bizarre New Way 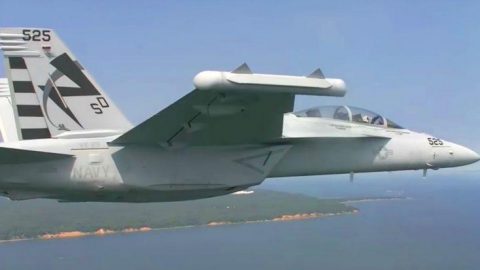 Powering fighters is not easy and it doesn’t come with a low price tag. Fuel costs the F-16 runs over $20,000 per flight hour, while 5th-Generation fighters such as the F-22 reach $68,000. Lockheed-Martin is attempting to sway prospective buyers claiming the F-35 is fuel efficient at a staggering $42,000 per hour. The US Navy announced that one their EA-18G Growlers took military fuel a step forward, it’s powered by kitchen grease.

A company in Panama City, Florida accidentally created a new biofuel that acts the same way as petroleum oil. The miracle fuel is known as Redijet has been selected by the United States Navy as a possible replacement for their jet fuel.

“It looks exactly like petroleum, the carbon emissions are a little bit less. Ours is the only one that will be certified as the 100 percent complete replacement for petroleum.”

The navy has begun an initiative to convert half of their fuel usage into energy efficient alternatives by 2020. The military runs on fuel, most vehicles using it in some capacity and convoys transporting oil in enemy territories are vulnerable to attack.

“Energy is a vulnerability, energy can be used as a weapon. When I came in, Marines were losing a marine killed or wounded for every 50 convoys of fuel being brought into Afghanistan. That’s too high a price to pay.”

Readijet is aiming to be cheaper and more efficient than petroleum fuels as well as reducing carbon emissions. Testing is in the early stages but making progress, you can see the fighters using Readijet in this clip from CBS Evening News.