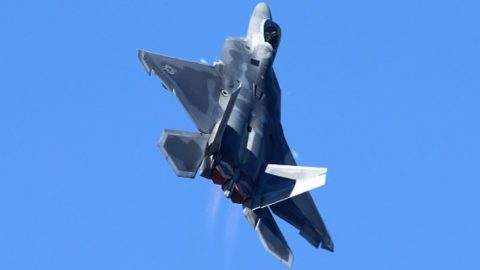 The Lockheed-Martin F-22 Raptor has been setting all kinds of standards since it was first introduced to the United States Air Force. It never fails to impress with its combat track record and aerial maneuvers when it takes to the skies. Many would agree that one of the most impressive feats is the vertical climb the F-22 pulls off with such ease.

The F-22 Raptor owes its sheer power to its Pratt & Whitney F119 engines. All that power combined with its thrust-vectoring ability make vertical climbing look like a simple process.

The F119 engines also give the F-22 a high thrust-to-weight ratio, which gives it the ability to handle the fighter’s weight many times over. Acceleration and maneuverability are all part of the F-22’s nature in flight thanks to this miracle of engineering.

“The advantage to pilots is superior low-speed and high angle-of-attack maneuverability, compared to conventional-thrust aircraft.”

But there is nothing better than seeing an F-22 in action, so check out how it tackles vertical climbing in this video.