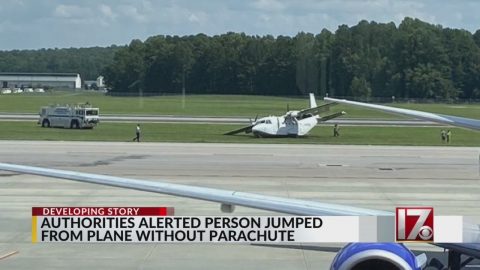 Jumped or Fell Out?

Mystery still shrouds the death of 23-year-old Charles Crooks after the plane he was co-piloting landed without him onboard.

Crooks was inside a CASA C-212 Aviocar alongside an unidentified pilot. The plane already had a missing wheel due to a failed first attempt at landing. When they got to Raleigh-Durham Airport, the pilot requested to do an emergency belly landing. He later added that there were two people onboard. ATC granted him the request and the plane landed with the pilot only suffering minor injuries.

However, his co-pilot was not inside the aircraft. According to the pilot, Crooks either fell or jumped out due to panic. Experts said that jumping out at 3,500ft is fooling, especially from a licensed co-pilot. What most probably happened was Crooks fell out of the rear cargo door while he was inspecting the damage and they were hit by turbulence.

His body was later found 30 miles away and investigators are still searching for other clues as to how this all really happened.