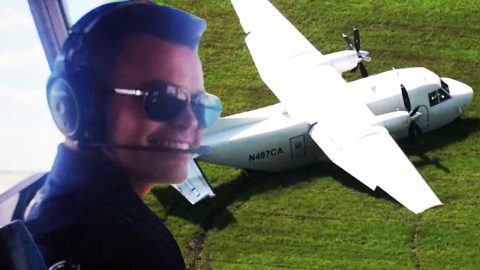 Due to the strange circumstances surrounding the co-pilot’s death, authorities are looking into this issue.

A CN-212 Aviocar had initially lost its right wheel when it failed its first attempt to land. When the pilot contacted Raleigh-Durham’s ATC, he requested to do a belly landing because of the missing wheel. The pilot mentioned that there were two people on board. However, he was alone inside the cockpit when he landed. His co-pilot, Charles Crooks, was nowhere to be seen.

The pilot thinks that Crooks either fell or jumped out of the plane due to panic. Aviation experts refuted the second theory because a co-pilot wouldn’t think that jumping without a parachute would be better than doing a belly landing on grass. What most likely happened was Crooks fell out of the rear cargo door when he was inspecting the plane.

Crooks’ body was found 30 miles away near a person’s backyard and investigators believe he fell from 3,500 feet.