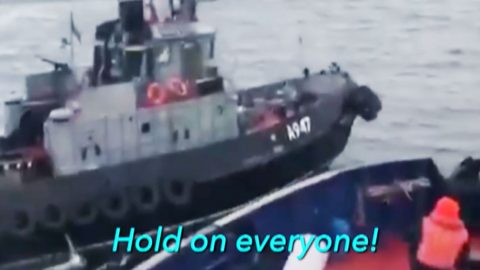 Russia and Ukraine have been at odds for years now, the latest annexation of Crimea nearly leading to an all-out war between the countries. Tensions remain high at all times even when it comes to international waters as the latest incident shows.

On November 25th, 2018, footage released by the Ukrainian Interior Minister shows a Russian Navy ship ramming a Ukrainian tugboat. The Russian captain is heard yelling orders to cut off and hit the smaller boat with intent and judging by his choice of words with anger as well.

Ukraine seeks a peaceful resolution to the Sea of Azov crisis but "reserves the right to self-defence" amid tensions with Russia, Foreign Minister Pavlo Klimkin says.

Further reports indicate two additional Ukrainian boats were shot at to make them stop in their tracks while operating in the same waters. The area in question is the Sea of Azov, the Kerch Strait and parts of the Black Sea off the coast of Crimea.

A treaty signed in 2003 between Russia and Ukraine made these waters international and friendly, but ever since the annexation of Crimea Russia has been taking greater control of said waters. In response to the latest incident, Ukraine has called for an emergency meeting with the United Nations to discuss upholding Martial Law in the region.

Both sides blame the other for the altercation.

You can find footage of the incident below.