Newbie US Paratroopers Forced To Jump In Middle of a Lake 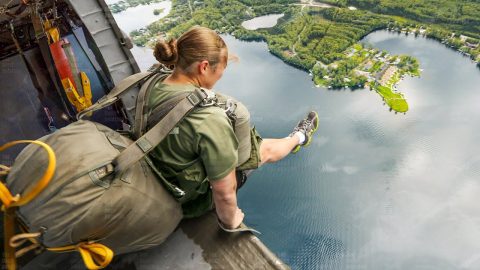 A Normal Day In The Office

Helicopters such as the UH-60 Black Hawk are capable of deploying troops in combat. In the first part of the video, we get to see the new additions of the US Paratroopers practicing their water jumps while onboard the helicopter.

When airborne, the aircrew tells the jumpmaster when to signal the paratroopers to jump. The jumpmaster would then touch them one by one while shouting, “Go!” to order the leap.

After landing in the middle of a lake, the newbies are then recouped by soldiers aboard support vessels for safety reasons.

Later in the video, we also get a chance to see a Chinook loaded with paratroopers do the exact same thing. Now that’s something you don’t wanna miss!