A Day in Life of a US U2 Spy Plane Pilot 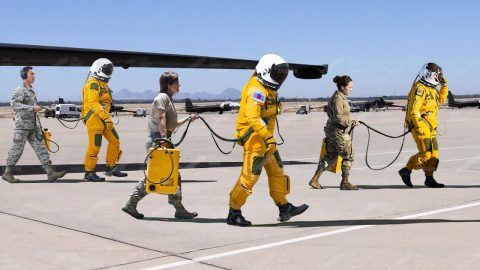 A U-2 pilot’s life can both be taxing and exciting at the same time. Here’s what their days would look like when assigned to a mission:

Outfitted With A Flight Suit

Hours before the flight, a U-2 pilot is dressed in a suit resembling a spacesuit. Their flight suit ensures that a sudden loss of pressurization wouldn’t affect or kill them during the mission.

The flight suit is tested for possible leaks before they’re allowed to enter the aircraft. Depressurization tests are done in the altitude chamber to see how the suit and pilot react.

After greeting the ground crew, the pilot enters the U-2 for final preparations. This includes strapping the pilot into the ejection seat and hooking up the oxygen system, among other things.

Assisted By Other Pilots

U-2 pilots are known to have a relatively difficult time taking off and landing due to the aircraft’s design. In these situations, pilots are assisted by a chase car operated by other U-2 pilots.

When they’re not flying, these pilots undergo health tests or train in gyms.