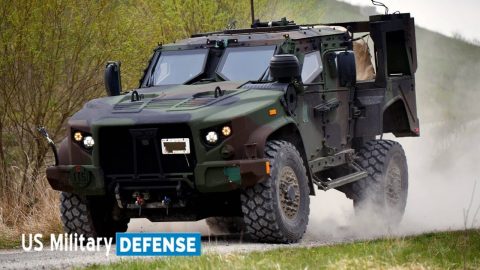 So far, about 13,000 Joint Light Tactical Vehicles were delivered to the US in 2021. Here’s what you need to know about this new army vehicle by Oshkosh Defense:

The vehicle was developed from 2005 to 2015 for the US Army and Marine Corps due to their desire to partially replace the aging fleet of Humvees in service today.

One of its variants, the Heavy Guns Carrier, is designed for over-watch and direct fire support of infantry maneuvers. The variant can defend itself against UAVs through its advanced non-kinetic weapon systems.

Oshkosh’s TAK-4 independent suspension system gives the JLTV the maneuverability it needs to conquer whatever comes its way – may it be scaling a rocky slope or outmaneuvering the enemy.

Its maximum speed of 70mph is possible thanks to its GBE 866T 6.6L turbo diesel engine. Plus, the JLTV has a six-speed automatic transmission, unlike the four-speed transmission seen in Humvees.