The High-Tech LCAC Hovercraft is Coming 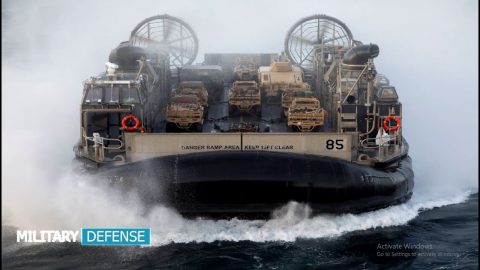 While carrying its full load of 60 to 75 tons, the LCAC can still get up to 40 knots. However, it is rated to have a maximum speed of 70 knots in minimal load conditions.

These special decks are large, enclosed spaces in the ship’s stern. Here, LCACs and other amphibious vehicles can load or unload troops, vehicles, and supplies efficiently.

Aside from providing supplies, LCACs can also be used for rescue operations, lane breaching, and mine countermeasure operations.

One disadvantage of the LCAC is its rubber and canvas construction, offering little protection for its crew or cargo from enemy fire. A vehicle as large as the LCAC also gives off a huge radar image in addition to being noisy.

The program aims to improve the hovercraft’s engine to increase power while decreasing fuel consumption and maintenance needs. Upgrades on the electronics on board have also been done to add ten years to its service life.