Partially Sunken Japanese Submarine Explodes After Being Hit by a Torpedo 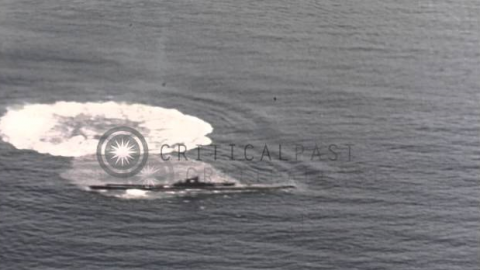 Following the conclusion of World War II, the US Navy recovered 24 Japanese submarines. Operation Road’s End was instituted by assembling the submarines at “Point Deep Six”, which was around 35km southeast of Fukue Island, and sinking them to a depth of 660 ft. The other four submarines were sailed to Hawaii for further inspection. After the inspection, they were also sunk near Oahu by torpedoes launched from the USS Trumpetfish. At the time, Soviets were demanding to examine the submarines.

In this particular short clip, it shows a partially sunken Japanese submarine hit by a torpedo.