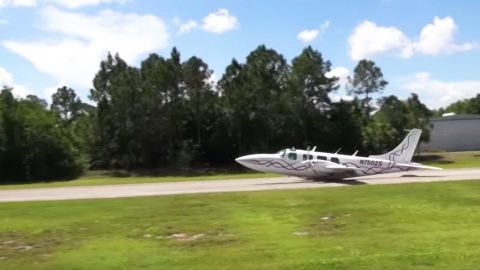 Not only did this guy not put down his landing gear before, well, landing, he also made an even bigger mistake which could have very easily taken his life. He took off again after a double prop strike.

First off, this is why checklists were invented. No matter how good you are, how many hours you’ve flown or what kind of plane you fly be it a Cessna 172 or F-18 Hornet, the checklist is something you should (and have to) use every single time you fly. As any pilot will tell you, a stupid mistake such as a gust lock not being taken off because you forgot can cost you your life. Again. Checklist, checklist, checklist.

This guy obviously didn’t use one but that’s not even the worst part. After he noticed he slammed hard into the runway and figured his gears weren’t down he took off again after striking the props of both of his engines. The strikes and no gear also made him lose a ton of speed so the obvious choice would have been to just slide to a stop.

Watch the video below to see for yourself how close to death this guy got himself by making mistake after mistake.