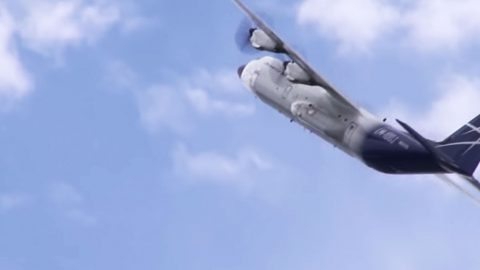 The good ol’ C-130 Hercules is a time-tested airframe. First flown in 1954, this turboprop military transport aircraft has been produced continuously since then with over 2,500 made since then.

Over the years, it has adapted to many different roles. As a civilian aircraft, it was converted to an air tanker for the U.S. Forest Service as well as a transport. For military uses, the list of variants is almost endless. Originally designed as a transport aircraft, it has since been used as a midair refueling aircraft, a gunship, early warning aircraft and has many other uses as well.

Recently, the new LM-100J aircraft (which you’ll see a demo of in the video below), was tested and is expected to enter production in 2018-2019. A longer version of the original C-130, this airframe is supposed to be used by civilian operators with Safair, Lynden Air Cargo, Transafrik, and Libyan Arab Air Cargo interested in purchasing it.

Before the aircraft is fully operational and can be sold, however, it has to be tested and tested again. This is where test pilots put new airframes through their paces, including this awesome loop that we’ve never seen before done with such a big aircraft.