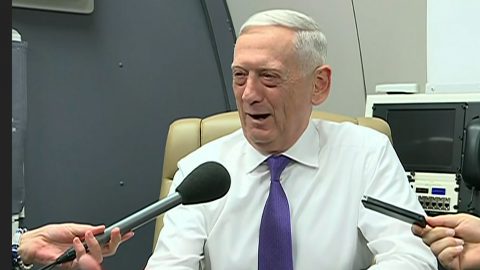 Just recently, Defense Secretary Jim Mattis was flying from Croatia to Norway and sat down with reporters during the flight. He along with President Trump were flying to NATO countries discussing budgets and policies and although at times things were said that are against popular opinion, the conversations were friendly.

An NBC report that came out the same day, however, didn’t make it sound that way.

According to them, right after Trump left NATO headquarters “U.S. military leaders embarked on a full-scale ‘damage control’ operation with calls to their counterparts across Europe to reassure them that America will abide by its defense commitments in the region.”

General Mattis was in active military service from 1969-2013.

When given that quote and asked for comment, Mattis, as always, was quick to say what was on his mind. “That was fascinating, I love reading fiction,” he said with a smirk, reassuring reporters the NATO conversations went smoothly and there was good cohesion between all parties.

A military mastermind who studied war tactics his entire life, Mattis is not going to be told the Pentagon was apologizing as he’s running the show. Our NATO allies know this and trust in Mattis’ recommendations on military strategy. As they should, because Mad Dog doesn’t lose.

“The appearance of U.S. Department of Defense (DoD) visual information does not imply or constitute DoD endorsement.”