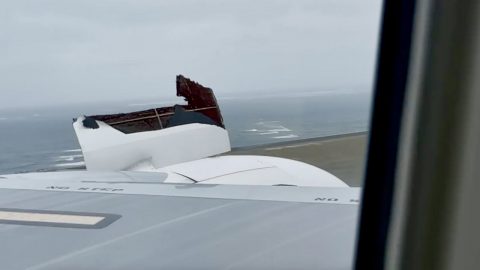 This is something you’ll dread seeing in person. A Japanese Airlines Boeing 777-200 suffered an in-flight engine failure just twenty minutes after taking off from Okinawa, Japan.

The 23-year-old aircraft had 178 passengers and 11 crew members on board. One of its passengers claimed they heard an explosion six minutes after takeoff.

Fortunately, the flight crew was alerted in time and discontinued the climb at 14,000 ft. The 777 returned to Okinawa thirty minutes later and reported no injuries on board.

Initial inspection revealed that two fan blades broke off from Engine #1. A part of its fan case was also missing, while the left aft fuselage and the left horizontal stabilizer were also damaged.

The lost engine cover was later found at Tamara island a year later.