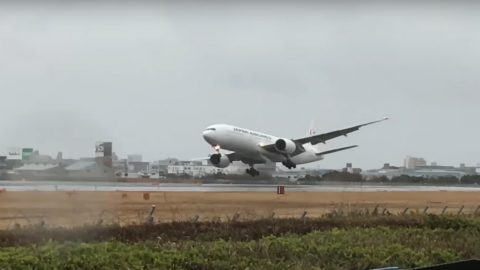 Japan Airlines’ Boeing 777 had a close call while landing during the stormy weather.

The airliner was on its final descent when a wind shear caused it to lurch from side to side. From the video’s point of view, it looked like the aircraft had about 10 feet of space left before it met the runway. Luckily, the experienced pilot guided the plane out of harm’s way and performed a go-around.

A go-around is a relatively standard procedure and is done when an arriving aircraft on its final approach aborts landing and climbs away from the airport.

It’s incredible how fast this aircraft can accelerate and regain altitude – to thrust that amount that quickly is almost impossible to comprehend!