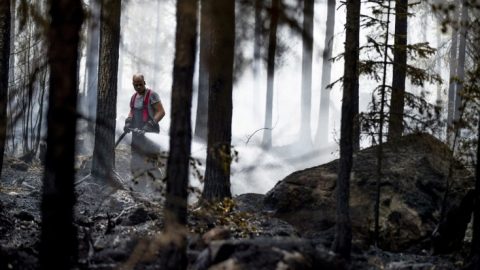 Record-setting heat has been nearly unbearable as it spreads across the European continent. The heat has caused many problems including fires and droughts indicated by the drying lakebeds. However, there is another unforeseen issue caused by the rising heat, WWII munitions are exploding.

Millions of bombs were dropped over Europe during WWII and many of them are still unaccounted for. Bomb squads have been known to respond to WWII bombs discovered in random places, sometimes three times per week. But now the rising heat is causing the bombs to explode randomly into an incredibly deadly situation.

Things were bad enough when locals find WWII-era bombs and pose for photos with them. But now they can be set off without any means of being provoked. There has been evidence that the recent forest fires provoked explosions of WWII munitions and only made the situation worse.

Firefighters struggle to contain the wildfires and the intense heatwave isn’t letting up anytime soon. We can only hope that remaining bombs aren’t triggered making a bad situation worse than it already is.