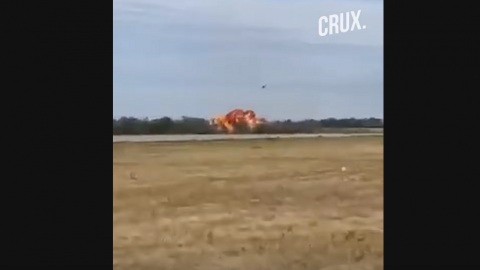 A video of a Russian Su-25 crashing has been making rounds on the internet. The jet aircraft was recorded taking off from an undisclosed location. Shortly after taking off, the plane banked to the left and never recovered. It crashed violently into the ground and created a fireball in its wake.

Since there hasn’t been any official statement regarding the incident, the internet had to make do with their own personal investigations. One Twitter user found out that a Russian videographer shared a picture of the pilot’s car keys with the following caption:

“These are Dani’s keys. Yesterday, his Su-25 lost control immediately after takeoff, and the plane crashed into the ground. Daniil died.”

The videographer shared the post on September 12th, leading many to assume that the incident happened on the 11th.

As for the location, there have been assumptions that it happened at either Millerovo Air Base or somewhere in Crimea.