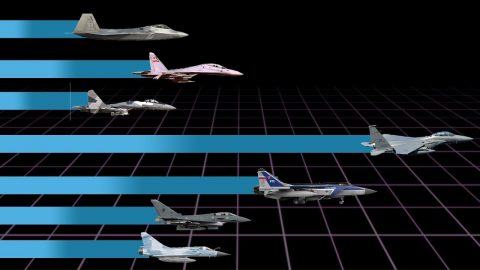 Speed has always played an important role in aerial combat, so it’s not surprising that technological advancements have led to faster and more efficient warbirds.

Starting off the list is China’s Chengdu J-10, which can achieve Mach 1.89 and is powered by a Lyulka-Saturn AL-31FN.

The beloved F-22 Raptor enters the list at number ten. This fifth-generation fighter jet is capable of reaching Mach 2 speeds.

Europe’s Eurofighter Typhoon and Russia’s MiG-23 almost have the same speed at Mach 2.2. The Typhoon is a prolific dogfighter, while the Flopper is the most produced variable geometry aircraft.

Two Russian fighters line the top two spots on the list. Unlike the MiG-25, MiG-31Es can “only” reach Mach 2.84. Meanwhile, the supersonic interceptor can technically attain more than Mach 3 speeds but its operational speed comes at around Mach 2.83.