Skilled US A-10 Pilot Pulls off Extremely Risky Highway Landing 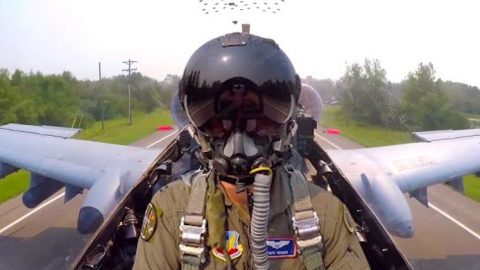 A skilled pilot successfully did a risky landing of an A-10 plane on a US highway for the first time in August 2021. VS Panel markers were placed along the highway to act as the runway markers.

The aircraft used full flaps to bring it to a quick standstill, then the pilot maneuvers the A-10 to perform a sharp turn on the two-way lane highway.

The A-10 was the first US aircraft built exclusively for Close Air Support (CAS). Two YA-10 prototypes were built and the first one flew in May 1972, while the first A-10 Warthog was delivered in 1976 and was used in the service soon after. It has been upgraded numerous times.

The nose art has its origin in World War II and is used by specific squadrons. Its engines are placed high above the fuselage to prevent foreign object damages. The A-X is not equipped with radar and the cockpit is installed with rearview mirrors. Watch the video below.