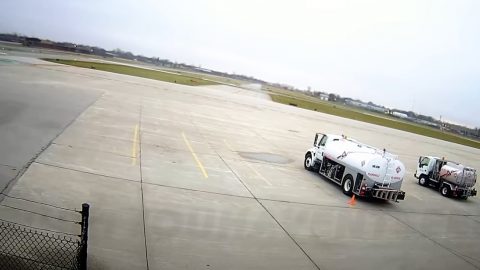 On December 3, 2019, a BAE 125 800A airplane, N469RJ, crashed into the runway and was substantially damaged in the accident accident near Detroit, Michigan. Luckily, the airline transport pilot and copilot were uninjured. The medium jet was operated as a Part 91 repositioning flight for a subsequent Part 135 flight.

The airplane departed from Willow Run Airport (YIP), near Detroit, and the crew was conducting an ILS approach to runway 33 at Coleman A. Young Municipal Airport (DET). According to the pilot, the airplane broke out of the clouds about 1,500 ft AGL, and had picked up rime icing during the flight.

“Although flight crew selected the correct Vref speed for the aircraft weight, they failed to add 10 kts for the ‘operation in icing conditions’ statement, per the aircraft checklist. Vref should have been calculated at 138 KIAS with a minimum approach speed of 148 KIAS.”

Watch the full video below.