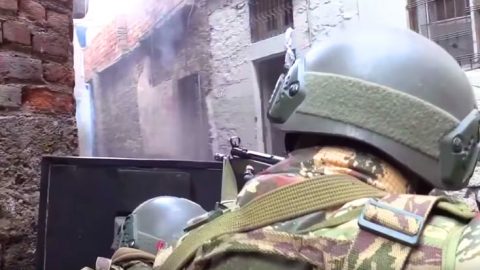 Soldiers train to be the best but always have to prepare for the worst. There is really no combat situation that any soldier wants to be caught in they simply go from bad to worse. However, close quarters combat ranges on the worse side because anything and everything can happen without even knowing what has happened.

A group of soldiers found themselves locked in close quarters combat against a trio of militants. The gunmen were part of the Kurdistan Workers Party (Partiya Karkerên Kurdistanê/PKK) who have been labeled terrorists for their uprisings in Turkey. They have caused the deaths of many innocents in strikes throughout the Middle East.

“Three of our heroic comrades fell as martyrs as a result of clashes with members of the separatist terrorist organization in northern Iraq.”

This bodycam video shows the Turkish Special Forces locked in a heated combat scene against three members of the Kurdistan Workers Party. Bullets start blasting from both sides as the soldiers duck and fire in an intense back and forth firefight. This space is about as tight as you can get but you can see just how things work out when you have the proper combat training.