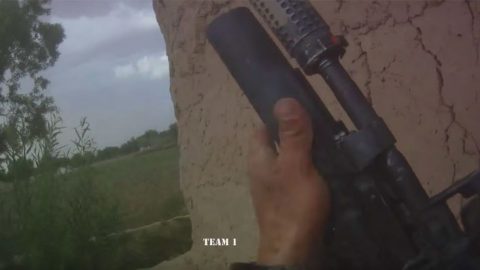 Marines have one of the most difficult roles in the entire United States Military. Marines are trained to be the best but they also prepare for the worst because anything that can go wrong, will go wrong. Things went very wrong when a Taliban a began attacking a Marine unit, but they quickly realized that is not the smartest idea in the world.

The Marines were on a recon assignment in Afghanistan, the last one before going home. The team was told to avoid combat if possible, but unfortunately, this was not a realistic situation. Bullets began raining down on them as soon as they reached a nearby wall and they took cover.

The only cover this unit has is a wall and some trees, but a vast open field is what separates them from their base. Friendly helicopters are off in the distance cleaning up after another previous mission and they can’t come to help. The Marines have no choice but to fight their way out of this do or die situation in order to return home. So check out this helmet camera footage of this heroic band of Marines taking on some very unfortunate Taliban soldiers.