Soliders Nearly Wiped Out As Bomb Explodes In This Battle Clip 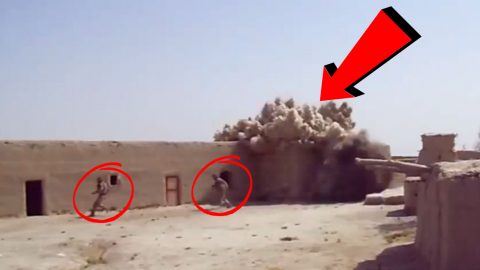 Although this happened back in 2014, this clip just hit our radar while looking for some combat footage for you folks. We figured that if we haven’t seen it (and we see a lot of this type of stuff) you folks might not have either so here we go.

Uploaded to LiveLeak, this video shows a state of the art Afghani stronghold made of the latest clay. From what we gathered from the description, the British soldiers in the video were tasked with blowing it up but things didn’t go as planned.

As you can see, my colleagues were very much near death. But the did it for the platoon. – Fellow soldier nearby

The best way to know that is that when you set explosives, you should give yourself enough time to clear the area. A good indication that you botched the job is when you have to sprint out of the building and get hit by all sorts of debris as the building explodes right next to you.

Although a scary situation, the other guys behind the wall start asking if their buddies are ok and to our relief, there’s an audible, “We’re alright.” As you can imagine, after that it was all laughs since no one got hurt and in a perfect world, cold pints were served.

Check out the footage below to see for yourself how close that really was.